Should you buy a wired-only router?, or will a wireless router be better option? Let’s jump onto wired router’s Ratings, Setup, Reviews, Comparison and Complete Guide. Plus, Also Check the best firewall for home and small business as a wired router works great with such device too.

Wired routers are still very beneficial for those who want a faster internet connection without any interruptions.

Of course, you will not be able to connect other devices wirelessly through wifi if you have a wired router.

Then, Why wired router?

Let’s say If a significant amount of data is being transferred or you are playing massive games on the server, then you will need a fast internet connection.

That is why using wired router over wifi is a much better option that can improve and boost your internet performance.

Also, it is very Impressive for home or residential connection.

One of the main factors of buying a wired router is its speeds. Since the connection type is “wired” and comes with gigabit ports (Modern routers), no doubt you will get remarkably faster internet speed if compared to wifi.

A wired ethernet connection gives up to 100Gb/s with the Cat6 Cable. As speed depends on the cable, you are using. The fastest one is Cat7 on the market which introduced recently.

Wired security is considered stronger than the wireless one. Why? Since it is wired connection, so nobody has access to connect. There is no other way of accessing internet without a cable.

On another hand, where wireless is allowing people to connect wirelessly. It means less secure connection than wired.

Flexibility is not going to be that good if compared to a wired connection.

Of course, A wireless network offers better flexibility as you can access and connect your wireless devices to it directly via wifi.

However, a wired router requires a cable (Ethernet). Also, you have to keep your computer and router at the same place.

This is another issue with a wired connection. Unfortunately, It depends on the Ethernet ports your wired router has.

Suppose, Your wired router has eight ports, it means you’re likely to connect only eight devices or PCs to it.

But, Wireless routers allow you to connect multiple devices whether it is your laptop, mobile, printer, etc. at the same time via wifi.

Other things to know, also What features to expect in an excellent wired router.

Let’s point out them one by one.

All Routers have processor and Ram, which enhance the overall performance of a router or internet. This is another considering point before buying a wired router. 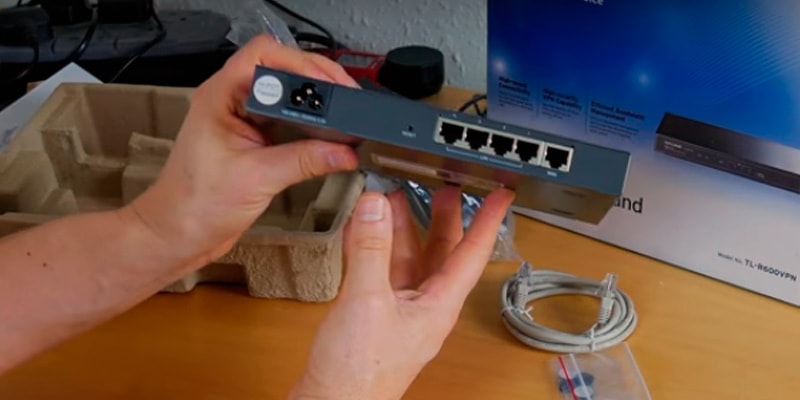 Tp-Link is known for a networking company from China which builds networking types of equipment. Tp-Link SaveStream is very affordable and cheap wired router; it is best for home purposes.

It has SPI firewall and DoS which protect the network from external threats, attacks, and hackers.

It has the capability to block any DOS service attacks like TCP/UDP/ICMP flooding, and other threats.

It also comes with MAC/IP Domain filtering functions which prevent from the viruses.

What you get inside box:

Some Pros and Cons:

Overall this is a decent wired router. If you want to buy a wired router for home use, then this TP-Link SafeStream will be an excellent choice because it is solid and thoroughly reliable.

Ubiquity is an American technology-based company. It has been building wireless networking products since 2005.

Now, let’s talk about ubiquity Unify Security Gateway wired router. It is one of the best-wired routers in its category.

It has great features for everyone whether you are a regular user or an advanced user.

Here are some features of Ubiquiti unify router:

It has Unifi Controller software for integration and management, also comes with its latest version V4.x.

It offers firewall to protect the network and data from hackers and other attacks. It is an advanced firewall feature for better safety and performance.

Since It supports VLAN, that means it can create the virtual network which allows you to manage network traffic and its security.

1. It doesn’t have FQDN-based VPN.

This is out of the box and an excellent wired router. You can set up an Unifi controller for SOHO network. Simply, You can buy it.

I would say this Ubiquiti network Edgerouter pro Is an impressive and the fastest wired Router. It has pretty much everything that an enterprise level routers have.

And it is very easy to set up. Once you use this type of enterprises class networking equipment, I promise you; there will no place for modern consumer class of routers like (Linksys, D-link, etc.).

Edgerouter pro supports and controlled or managed by UNMS. UNMS stands for Ubiquiti Network Management System. UNMS is a very intuitive and great controller for managing this wired Router.

Since Edgerouter pro has 6 Gigabit ports and 2 Rj45/SFP Gigabit ports which make connectivity very strong and improve overall speeds of your internet connection.

Let’s talk about some pros and cons here.

Overall this Wired Ethernet router is excellent with the firewall. Believe me; you will get terrific speed with this unit. I would say it is a high-quality product for reasonable price.

Let’s see what the differences are:
And, the comparison should be like this:

However, speeds may vary, and it depends on the connection you made. I found three ways to connect a wired router to your computer.

These days the ethernet cables are too fast, depending on which cable you choose, it may be Cat5e, Cat6, Cat6a or new one Cat7, and speeds you get with these cables are different ( 1Gbps to 10Gbps).

DSL or ADSL connections is not that fast if compared to ethernet. It provides speeds 1Mbps to 128Mbps.

Powerline networking uses electrical wiring of our homes as a wired network, just plug it into a power outlet. In other words, you might say it sounds like outdated technology. However, Powerline adapter is a very cheap solution. Though, you get speed upto 1200Mbps.

Similar to cable standards, there are wireless standards too. You might have heard about IEEE 802.11 (a/b/g/ac/ad).

The wired connection requires devices which support the ethernet or HomePNA. Most modern computers like Microsoft surface or Macbook air don’t come with the ethernet ports. In this case, you can use Ethernet LAN Network Adapter. Whereas, wireless connection requires only Wi-Fi supported devices, if you have an older desktop computer, then you should use a USB wireless network adapter.

As we know, wireless networks are less secure because they are accessible from public space. Even though they offer encryption (WPA, WPA2, etc), but compared to the wired connection, they are not as secure as wired connections.

We need two wired routers if we want to extend the network. It also increases the numbers of ports which will help in connecting more devices. Thus we don’t need any network switch or hub.

First of all, you need to connect your wired router to the computer using an Ethernet cable.

Now, We will access our router, to do so put an IP address of your router into the address bar of your browser and hit enter. Now, you will be on the login window, just type a User name and a password there.

After login into your router, it’s time to access the LAN (Local area network) address and DHCP pool in the network configuration settings. Not down those numbers because we’ll use them later. Now close the router window.

Take your second wired router and connect it to the computer via Ethernet cable, and repeat step 2 and reaccess your router.

This time try to find the security tab and navigate the WAN (Wide Area Network), type there those numbers (first wired router) which we wrote down before. But make sure the DHCP pool you enter here should be different or outside of the first router’s DHCP range.

Now, find LAN setup and turn off the DHCP.

Open wireless configuration setup and type a different SSID name, which should be unique from the first wired router.

Go again in the security settings and create any strong password and use WPA or WPA2 encryption.

Note: You should write down everything you changed during this process.

How To Use Wired Routers with VPN?

The main reason for Using a wired router is security and safety. So, it is better to buy a router which has VPN (Virtual Private Network) capabilities, right?

The wired routers which come with built-in VPN make your home or business wired network connection more secure.
Take a look at what TechRadar says about VPN Security and free Vpn services for a wired router.

What is the difference between home and business wired routers?

It’s always been an excellent choice to use wired routers for home and business if security is your main priority.

However, it depends on users who will be using, suppose you want to buy a wired router for home, then you can buy any basic routers because you don’t need that much security that a business wired router typically provides, again it depends on your needs.

How to turn the wired router into wireless?

There are a few ways you can do to turn your wired router into the wireless network and easily share your ethernet connection with all your devices. However, I only found one of the best methods which I am going to share with you below.

You can do so by setting up a wireless router with a laptop. It allows your laptop to create a WIFI hotspot.

However, some modern laptops like windows’ ultrabook and apple’s Mackbooks don’t have ethernet ports. In this case, you have to USB Ethernet adapter or connector, which can convert the ethernet to a USB port.

After connecting your laptop via ethernet cable, create a mobile hotspot and share the connection with all your devices.

Here is a complete guide here.

What is an Access point? How do you connect it with a wired router?

Guys, An Access point is nothing but a device which creates a wireless LAN (local area network) or WLAN. It is used by people who have a big house or office etc. You can connect an access point to a wired router, hub or Ethernet switch using an ethernet cable.

Suppose, you live in a large building and you can’t access wifi because of the router’s range. In that case, you can set up wireless access via ethernet cable.

Troubleshooting of Wired Routers: Slow wired connection through a router?

As I said earlier, The Local area network (LAN) which we create from a wired router is more reliable, secure, stable and quite faster than a wireless router. However, sometimes we might have faced some operating issues with a wired router. So, If it happens to you then how will you troubleshoot a wired router by yourself.
Here are five steps you need to perform to troubleshoot your wired router.

Best Wired router for Xbox One

I think Ubiquiti Networks Edgerouter Pro 8 is an ideal router for Xbox one. I am using it for the last year, I don’t have any problem with this unit, Although, it is quite fast and easy to set up.

If you’re like me who uses smart tv, VoIP Vonage box, sound receiver, media center, Wifi access point, powerline adapters, multiple ip cameras, and many more, so, it won’t be possible if I use a single wired router which comes with only 4, 6 or 8 ports. Thus, I had to use a 16 ports Gigabit switch to make this possible.

Guys, I have tried everything to explain in this guide for choosing best-wired router.
I used these three routers personally and didn’t get any issue with them. Here in this guide, I figured out features, pros, and their cons.